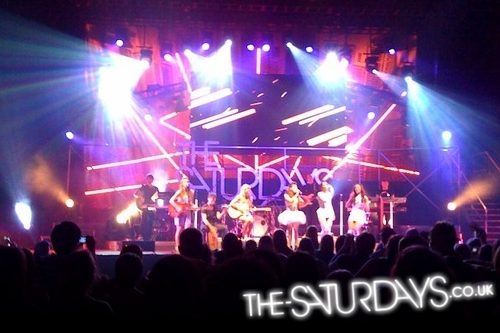 Check out an exclusive video straight from the official site after the jump!

END_OF_DOCUMENT_TOKEN_TO_BE_REPLACED

When they gave their first interviews just 12 months ago, The Saturdays brazenly declared an intention to sell more records than label-mates Girls Aloud. Some pop fans questioned whether the group had a USP, but four singles down the line, each having charted higher than its predecessor, there’s no denying that Project Sats has gone really rather swimmingly. Hoping finally to bag their first chart-topper, the girls are back with one last single from their debut album Chasing Lights.

A standout example of the fresh, sparky electropop sound that’s taken said album to platinum status, ‘Work’ is strong enough to withstand comparison with the brilliant Kelly Rowland single of the same name. Over pounding beats and synths that wouldn’t sound out of place on a Rihanna record, the girls ooze attitude as they urge the boys to “work, work!” for their affections. This is as sassy and infectious as manufactured pop comes, but after a much-delayed release, could the girls once again miss out on that elusive number one?

A work of art.