Last night the girls played their first US headlining show at The Roxy in LA. the girls took it back to the old school and a real treat for the US fans as Mollie and Una got put their guitars as they performed the classic ‘Chasing Lights’ from their first UK album!

Theres a bunch of videos on YouTube. I’ve embedded a few below for your viewing. You can catch the rest on YouTube 🙂

The Saturdays today announced they will be starring in the all new E! series Chasing The Saturdays. The show will be premiering in the US at 10pm on January 20th with a UK premiere currently in the works.

Mollie, Una, Rochelle, Vanessa and Frankie have had an incredible run of success in the UK. They have had eleven top 10 singles, three top 10 albums and recently completed a UK arena tour. In total they have sold over three million records. The girls relocated to Los Angeles in August to begin filming the series.

Each 30 minute episode of Chasing The Saturdays will be filled with music, laughs, drama, glamour and fun as the five young women navigate their way through the U.S star-making machinery. From signing with renowned music label Mercury/Island Def Jam Records on their debut US album and promoting their new single ‘What About Us” – to settling into a new and vibrant city, and dealing with husbands and lovers back in the UK, The Saturdays handle it all with spirit, humour and their infectious personalities.

The Saturdays will back in the UK at the end of the year ahead of the UK release of new single ‘What About Us’ in early 2013.

@TheSaturdays have been featured on the Ryan Seacrest website, as you know he is the host of such shows such as American Idol and also has a radio show in the US, he typically seen on major US entertainment shows on hosting duties.

He has posted a clip of ‘What About Us’ on his site along with confirming that the new US TV series, ‘Chasing The Saturdays’ will premiere on Sunday 20th January 2013!

Sad news. Frankie won’t be performing with the girls and doing her US duties for the time being due to a death in her family. Frankie found out yesterday that her grandad has sadly passed away and that she is obviously returning to the UK for the funeral and to be with her family. We obviously send our best wishes to Frankie and her family during the sad time.

Below are a few pictures of Frankie and the rest of the girls doing some work in LA before Frankie got the news. 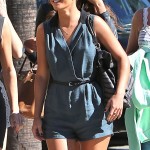 Hey all! Hope everyone is good and well! Sadly it’s not the most exciting time being a The Saturdays fan right now as the girls are all business like in the USA. We know the girls hit the recording studio with Rodney ‘Darkchild’ Jerkins the other night. He is the man behind massive tunes such as Telephone by Lady GaGa and Beyonce plus produced many a song for other acts such as Britney Spears, the late Michael Jackson and others. This is an interesting time for the girls who are finally recording with some heavy hitting producers in the US, will these songs bring them US success and their first UK number one? Lets hope so!

The girls favourite UK news source has been posting pictures of them out and about doing business type stuff. Rather than reproducing all the pointless stuff they write, I’ve posted up a few pictures from there for you to view. Hopefully we will have some more concrete news about ‘What About Us’ shortly as we are nearly in November (scary eh? – where has this year gone?!)

A new video! It’s been a good couple of months since we’ve been able to bring you a TV appearance from the girls! So here’s the girls long awaited appearance on ITV’s retake on the classic TV Surprise, Surprise. Remember ages ago we broke the news that the producers of the show where looking for members of TeamSats who warranted a place on the TV show, well the show has finally aired and you can view the show below, in HD of course 🙂

Again, if you want to use our video please do, vimeo has all the embed codes you will ever need, and please credit us back at www.the-saturdays.co.uk

In other news, People Magazine finally published their interview with the girls, you can check it out on their website

Hi TeamSats! Sorry for the lack of updates recently I’ve had a University exam this week so have been preparing for that, and actually sitting it! Fingers crossed it all went well, should have the result in a couple of months.

I would have love to have come back to a wealth of news, but sadly (unless I’ve missed something) its all quiet. The girls are still in LA recording their new album and are preparing for their first headline show in the US on the 30th October at the Roxy Theatre!

The girls favourite UK media source, the Daily Mail, has seemingly been doing their usual of posting pictures and attempting to create news to go with it, I’ve posted a few of the pictures that they’ve posted up below. I think its fair to say that the girls are looking good and enjoying the weather over in LA!

Also, just in case you’ve not noticed, you can now catch Ego on Lyroke! My top score is a rather pathetic 110,000 so I’m sure you can beat that!!

Life is a beach when you are a member of The Saturdays! Or at least when its your day off! The girls have been hitting the beach in LA to make us all super jealous when they come back to a late autumn UK! Check out these pictures of the girls as they hit the beach in LA, and learn to catch a wave!

We are fully aware that remixes of ‘What About Us’ have leaked online recently, out of respect for the girls, their management and their label, we won’t be posting these online.