This morning our lovely girls appeared on the Radio 1 Breakfast show to premiere their new single ‘What About Us’ featuring Sean Paul. The girls also chatted about their new TV series, and Vanessa decided it would be a good time to spout out an inappropriate word live on air .. only Vanessa 😉

According to various radio stations online the girls are doing a ‘radio day’ in London today so I expect a raft of UK media and press updates coming soon.

In other news, Rochelle has been shopping for baby clothes – according to the DailyMail – and apparently for girls clothes. Check out some pictures below. 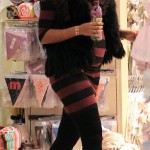