Forgot to add this yesterday, but incase you have been living under a rock, here’s Mollie’s advert for Maybelline UK, maybe she’s born with it? 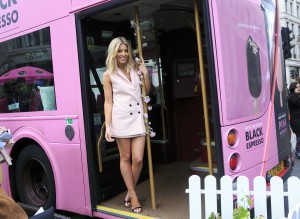 We celebrate all the girls birthday’s equally here at The Saturdays Fansite, but Mollie’s is always a little more personal, down to the fact we have been involved with her birthday book for many years and more recently her birthday charity donation drives which you guys have donated over £800 towards, which is amazing!

So a huge Happy Birthday to Mollie! This is from myself, Matt, and everyone else who visits this website over the years! We all can’t thank you enough for being the best blonde member of the group 😉

From a personal level, I can’t thank Mollie enough for her personal support towards myself and the site, always there to say hi, thank you, and a laugh – even if she did leave the labels on her jacket zip on Sunday, which she told me off for making a comment 😉 Also for her support for close friends of the site, such as my girlfriend Rosie, and our good friend Claire – whom have also worked on the Birthday Book in recent years. From meeting us last weekend and ‘dragging’ us on the Magnum bus for a chat, to meeting us at Westfield’s basement last year, and even backstage at Birmingham Pride in 2012! Plus the many others out there, whom I’ve met, who Mollie has played a key part in their life!

There is still time to get involved, if you have a spare £1 (or whatever you can afford!) please send a donation to her 2015 Birthday Charity Drive – for the British Heart Foundation. We have raised over £300 now, and would love to reach it higher. So if you can please donate online or text MKBF87 (amount) to 700070 so to donate £5 text MKBF87 £5 to 700070. If you want to contribute to her birthday book, there is still time! Full details can be found here, and send in your contributions to mkbirthdaybook@gmail.com

So I’m sure you will all join me in wishing Mollie (again!) a lovely birthday and have the most wonderful day!

The Higher star set off her sporty outfit with a pair of flat white trainers, with her long bob wore in a straight style.

The blonde beauty joined in on the action in Italy following the Cash & Rocket launch gala in London last Thursday night and a fun-filled bash in France on Sunday at castle-set resort Chateau de Pizay.

Cash & Rocket, a fundraising initiative that has been running since 2011, features 70 women being sponsored by major fashion and luxury brands to drive across Europe.

This year’s route, which is raising money for three African charities, began on Friday in London and ended in Cannes on Monday night.

During the five-day spree, the drivers – who also include Topshop heiress and rock diva Jo Wood – passed through some of Europe’s most glamorous settings, including Paris, Lyon and Milan.

The challenge is right up Mollie’s street since she recently opened up about her competitive side during an interview with MailOnline.

‘I would only want to do a reality show where you learn a skill, rather than sit around talking’, she said.

‘I’m very competitive. I went on The Cube last year and I loved that.’ 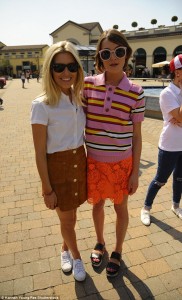 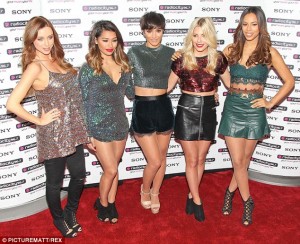 Not that this article is saying much more than we didn’t know already, as I posted previously I would be shocked if by Christmas this year we hadn’t had seen three solo releases … and now being reported by The Mirror!

They’ve been standing side by side on stage for eight years, but now 3am can reveal THREE members of five-piece girl group The Saturdays are launching solo careers.

Una Foden, Mollie King and Vanessa White have been in separate studios working on their own music.

While the girls are hoping to release their new solo material by the end of the year, we hear that they’re each going for a very different sound.

Irish songbird Una, 33, who has two children with rugby player hubby Ben Foden, is the closest to signing a record deal and has been honing an acoustic, country sound with her guitar and songwriting skills.

Pop princess Mollie , 27, has been polishing off a disco vibe with an 80s feel and a big Kylie Minogue influence. She is close behind Una in securing record label backing.

Meanwhile, the girlband’s youngest member – party girl Vanessa, 25 – is experimenting with an R&B feel, inspired largely by Rihanna. She is trying to find edgy tracks that show off her impressive vocal range.

The Saturdays are still signed to Polydor, but are having a breather from releasing music as a group.

The move comes as Rochelle Humes, 26, focuses on her TV and presenting work and Frankie Bridge, 26, prepares to give birth to her second child.

An insider tells us: “Una, Mollie and Vanessa are all really excited and a
bit nervous about releasing their solo material, but it’s been a long time in the pipeline.

“The girls are still a band, but they’re all happy to work on their own solo projects. It means there’s no animosity or frustration between them – it’s a set-up which works really well.”

Hi all!
Just a quick update about Mollie’s birthday book! To help raise additional funds I am personally selling a signed copy of the girls US EP ‘Chasing The Saturdays’ on eBay. 100% of the money is going to this years chosen charity The British Heart Foundation. Please give it a look on eBay and bid if you can!

Last night Una’s act Patrick Donoghue was crowned the winner of The Voice of Ireland! So congrats to Una and Patrick for their fine win. The winners single is on iTunes Ireland now! Una has also expressed her interest in returning to the show for the next series!

One for us all to think about, think about what you say before you actually say it!

Mollie King has revealed that it took her a long time to toughen up to hurtful comments.

The 27-year-old who is one fifth of girl band The Saturdays said that it can be difficult at times to not take negative comments to heart.

Speaking to the Evening Standard she said: “It has honestly taken a while to teach myself to toughen up because you can take it personally and I think you can get a bit lost in it all. It’s part of the job. It definitely is hurtful.”

She continued: “You just have to think with everything I do some people are going to like it and some are going to hate it, you can’t win them all. You’ve just got to go with what you feel.”

King – who is dating model David Gandy – is the current face of Magnum’s Pink & Black campaign and has helped build the ultimate Pink & Black experience which reflects the playful and sophisticated sides of people’s personalities.

Despite three of her fellow band mates, Una Foden, Frankie Bridge and Rochelle Humes being mothers, King insisted that they still know how to show off their playful sides on tour.

“Obviously with being mums it’s such a huge responsibility so they were very much wanting to speak to the babies, and their husbands bought them up as much as they could,” she said.

“But the girls still know how to let their hair down as well.”

She described being on tour as the “best part of her job” and revealed that she wouldn’t want to go solo as she would miss the “incredible feeling” of coming off of the stage and sharing the moment with the girls.

Mollie is out and about again! This time at the unveiling of Louis Vuitton’s latest Curated Shelf at the brand’s flagship Bond Street store in London on Thursday.

Mollie was dressed head-to-toe in the luxury fashion house’s clothing as she mingled with the elite crowd celebrating contemporary artist Blaise Drummond’s fresh take on the project.

The Curated Shelf, which was launched in 2010 and endeavours to close the gap between art and fashion by encouraging artists to share their portfolio of work at Louis Vuitton’s Bond Street Maison.

Blaise Drummond is the latest modern artist to be honoured at the London address, which has previously played host to luminaries Tracey Emin, Jake and Dinos Chapman, Juergen Teller and David Bowie.

Mollie also talks to Grazia magazine about going to the Gym and David Gandy (of course!)