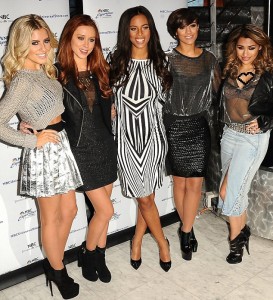 Hey all! The Saturdays are confirmed to be performing on this years annual Christmas Top Of The Pops – the show is 2 hours long this year – and airs at 2pm on BBC1 on Christmas Day. So tune in to catch the girls performing ‘What About Us’ (I’d imagine) whilst you eat some Christmas dinner! Yes this performance WILL include Frankie … welcome back Frankie!

Mollie King of The Saturdays said: “It’s such a legendary show and we watch it every year with our loved ones while celebrating the holidays.”

Her bandmate Frankie Sandford said: “I personally couldn’t be more excited to be back with the other girls for this special performance.”

Talking Frankie, last night she followed us on Twitter, that now means that all five girls are following the site on twitter – which is an honour – so if you have twitter why not follow us too @TheSatsCoUk 🙂 So thank you to Frankie, and the rest of the girls for your support over the years.

This afternoon The Saturdays went into their ‘long dresses’ wardrobe and performed Disco Love on the first episode of the new series of The Paul O’Grady Show. As always you can catch this performance below.

The girls where also added today to Free Radio Birmingham’s Free Radio Live 2013, sadly the event is basically sold out (unless you want to stand), this is in addition to their shows in Scotland and Leeds this festive season.

Firstly we start with the news that our very own Mollie is doing a charity auction with Battersea Dogs & Cats Home in London. Highest bidders will win a full half hour with their favourite dog loving celebrity, and the walks will take place in the relaxing surroundings of Battersea Park, close to the iconic south London rescue that has cared for 3.1 million dogs and cats.

All money raised is being used by Battersea Dogs & Cats Home who help thousand’s of homeless dogs and cats ever year.

You can bid on the event via the official site, as of time of posting Mollie’s 30min walk is currently standing at £510, so it’s probably out of most of our visitors reach, but I would expect Mollie’s walk to raise close to, or over £1000 🙂

The girls are performing on TV! Yes (I know!) the girls are seemingly set to perform Disco Love on the new series of The Paul O’Grady show, they are on next Monday (11th November) from 5pm. All videos will be on the site after it airs 🙂

Yesterday the girls launched their new Nokia deal. As we reported a while back, you can be in with a chance of seeing The Saturdays in a concert in February next year. There are only 20 winners, and to be in with a chance you must buy a mobile phone from the Carphone Warehouse range, including the Nokia Lumia 520. I know this has caused quite a mixed reaction within the fanbase. I’ve added a few pictures below.

Site News: I know our gallery is a mess, I have an idea to resolve it but its very time consuming, and I honestly don’t have the time to source pictures anymore along with everything else. If anyone out there wants to help and lend a hand then please contact me via e-mail on thesatscouk@gmail.com

Hi all. Sorry for the late update on this, this obviously happened yesterday whilst I was at work then I rushed out after work to the Arsenal game (Who I must admit did play Disco Love at half-time!) Video on our twitter and Instagram.

Yesterday our girls hit the BBC Radio 1 Studio’s to perform on their Live Lounge series, they performed Disco Love and a mashup from Drake/TLC/Destiny’s Child. You can relive the performances via the BBC Radio 1 website – yes these are videos!!

Today the girls appeared on The Alan Titchmarsh Show, which included an Interview, some Roller Skating and of course a performance of Disco Love, you can catch these below. Remember the girls new album, Living For The Weekend, is OUT NOW! Pick up a copy from iTunes (or your local music store!) now!

This Morning the girls appeared on … This Morning .. they had a chat (video coming soon) and performed the new single Disco Love, which you can view below:

Update: Sorry something went a little wrong, this is what happens when you leave technology to get on alone, it should now be working …

I do have the Interview, but it will take me time to get it off my TiVo, I also need to do 3-4 hours worth of revision this evening, as my exam is this Friday, so as you can appreciate that is my primary concern right now, but for now enjoy the performance (sorry for the breakup at the start!)

Disco Love – the new single – is OUT NOW! Click the links below to buy!!

Disco Love is taken from the BRAND NEW ALBUM, ‘Living For The Weekend’ which is OUT NEXT WEEK! Grab that whilst you are at it, the standard album is JUST £6.99 or grab the DELUXE album, which has over 20 different items, for a bargain £9.99

This morning our girls hit the ITV studios to perform their new single Disco Love on Daybreak! The single is nearly Top 3 on iTunes now which is amazing, so if you’ve not picked up a copy download now!!

Don’t miss our updates from yesterday, Disco Love performed on Surprise Surprise, an awesome acoustic performance of Disco Love on Sunday Brunch and Mollie on Through The Keyhole.

Disco Love – the new single – is OUT NOW! Click the links below to buy!!

Disco Love is taken from the BRAND NEW ALBUM, ‘Living For The Weekend’ which is OUT NEXT WEEK! Grab that whilst you are at it, the standard album is JUST £6.99 or grab the DELUXE album, which has over 20 different items, for a bargain £9.99