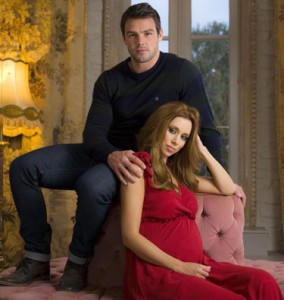 Una Healy has revealed the sex of her baby.

And it seems that her bandmates could be in for some competition.

She’s having a little girl.

The Saturdays singer found out the gender of her little one at a 20-week scan and has announced the news to Hello! magazine.

She said: “I come from a family of girls, I went to an all-girls school and I’m in a girl band, so I guess it’s fitting that I’m having a daughter.”

The Saturdays’ All Fired Up tour starts next month and, although Una admitted that she will be swapping her heels for flats after a scary fall recently, she can’t wait to get going.

She said: “I’ve been quite surprised that people have said, ‘How will you do this tour?’ Naturally I’ll be careful and I’d never do anything that would put our baby at risk. But I’m pregnant, not ill.”

She added: “Loads of women continue to work through their pregnancies and this is my job, so why wouldn’t I carry on doing what I love – especially when I feel so well.”

Her super-hot rugby player boyfriend also said in the interview that although the baby wasn’t planned, they’re both chuffed to bits.

He said: “We weren’t trying for a baby.

“But we’d talked about starting a family and we’re in a loving and committed relationship, so it wasn’t a massive shock. I was over the moon. I plan on spending the rest of my life with Una.”

The full Interview is available in Hello magazine, which is out in shops today!