The Saturdays and a raft of other celebrities lend their support to the England Ladies Rugby Union team!

The 2014 Women’s Rugby World Cup (WRWC). Hosted in and around Paris between August 1 & 17, the 12 best women’s rugby nations are set to compete for the right to be crowned world champions.

Just in case you needed reminding, the new single (and album!) from the girls is out in under just TWO WEEKS! What Are You Waiting For? was also performed last night at the Leicester Music Festival, we where in attendance, the girls performed a selection of songs from their forthcoming Greatest Hits album, all this minus Frankie who wasn’t with the girls – presumably on her honeymoon, but (for whatever reason) the girls never announced why she was missing!

Here is the performance of ‘What Are You Waiting For?’ which was recorded by myself, so please refrain from reuploading the video, just use the embed links on Vimeo and credit us here at the-saturdays.co.uk

Una also went solo in Ireland (I’m joking!) she appeared on the RTE show Saturday Night with Miriam. Sadly with this being an RTE show we don’t have the full show but here’s Una performing Issues:

Firstly congratulations to Frankie and Wayne, who got married last weekend! Everyone here at The Saturdays Fansite sends out our best wishes to the newly married couple!

Tomorrow on 4Music you need to tune in at 4pm to catch Summer Scoop with McFlurry featuring our girls The Saturdays!

You can catch a preview of the show here!

Hold on to your Sun Hats, because Summer Scoop with McFlurry is back! 4Music presenters, Rickie and Melvin are hitting the bowling alley with the gorgeous girl group, The Saturdays!

Rochelle, Mollie, Vanessa and Frankie swap their heels for bowling shoes as they take on Rickie and Melvin in the ultimate bowling championship.

Vanessa: Mollie is very competitive and a sore loser.

During the show, we find out which member of The Saturdays eats the most, sweats the most and takes the most selfies. Rickie and Melvin also get the inside scoop on what life is like for new mums Rochelle and Frankie.

Vanessa: I don’t think we’re allowed to babysit, they don’t trust us.

If that’s not enough, there’s also an exclusive interview and performance from The Vamps and the boys from 5SOS tell us their favourite summer anthems…

Watch online at www.4music.com/watchnow or stream live from The Box+ App.

Just to compliment the news about the site, as you are aware Rochelle and Marvin are back on This Morning hosting duties this summer, starting from today, and every Friday! 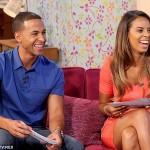 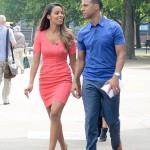 This afternoon the girls appeared on the Scott Mills show on BBC Radio 1:

I don’t know if there was more, I was at work and the show isn’t available on the BBC site yet … once it is I will take a further listen.

Also there is a new tour poster 🙂 Also don’t miss the earlier post in the day, scroll down and get involved in Una’s birthday book!

Not long left – well a few weeks – to get involved with Una’s Birthday Book this year! All the details you ever need can be viewed on the twitlonger which can be seen here then e-mail your pages over to unasbirthdayproject@hotmail.co.uk

Any questions? Then send a message over to @UnasBdayBook!

You can now pre-order The Saturdays new album, Finest Selection – Greatest Hits from both iTunes and the official store.

On iTunes you can spend £10.99 on the Deluxe Version of the album which has 39 songs (yes 39!!) which includes the full Greatest Hits package and ALL those wonderful b-sides in a single package.

You can also spend £29.99 and head over to the girls official store for the SUPER Deluxe Edition which has:

– Metal white powder coated tin with colourful Saturdays logo on the lid– Greatest hits CD– B sides and rarities CD– DVD of all the videos– Soundcard lanyard with logo embossed strap and recording from the girls (Get Ready, Get Set)– All housed in foam neatly inside the tin

For those with tighter purse strings, you can also grab the standard edition of the album for £8.99!

So What Are You Waiting For? Get ordering!! Plus Get Ready, Get Set as the lanyard song! You choose well TeamSats! 🙂