Hi TeamSats! Hope all is well 🙂

As we all saw coming (with the removal of the mailers and flips) the start of 2015 hasn’t been the most exciting for the group. What the actual future holds for the group is anyone’s guess right now, answers to us @TheSatsCoUk if you know anything – we sure don’t!

Either way the girls continue prepping their own solo projects, Mollie recently completed her photoshoot for the upcoming Spring/Summer range for Oasis. Rochelle continues her own range for Very plus appeared at the NTAs last night, looking stunning in her custom dress (see below!), obviously Una is on The Voice of Ireland – and expecting a little boy in a matter of weeks! Plus obviously Frankie is expecting and Vanessa is also prepping something it seems.

I just hope that you all understand that I’m not going to post news for the sake of news, the lesser news updates you can keep up-to-date by following us on Twitter and Facebook.

Hopefully something will happen sooner rather than later, we are all crossing everything! 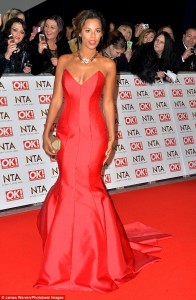 Happy Birthday Frankie!!  Today is the 14th January and that only means one thing, its our Frankie’s Birthday!! So a huge happy birthday to Frankie from everyone here at The Saturdays Fansite! Have a wonderful day and we hope Wayne, Parker and baby number two treat you well!

Everyone here at The Saturdays Fansite would like to congratulate Frankie and Wayne for their announcement that baby number two is on the way!

Frankie took to twitter tonight to announce that she is expecting baby two and will therefore be missing the Strictly Tour:

So excited to tell you that Wayne & I are expecting another baby later this year. We cant wait for Parker to have a little brother or sister

Sadly I’m really unwell with my pregnancy and won’t be able to take part in the Strictly tour. I’m SO sorry. I was so looking forward to it. — Francesca Bridge (@FrankieTheSats) January 8, 2015

We extend our congratulations to the couple! 🙂

Happy New Year to all our wonderful visitors! We hope you had a great Christmas/New Year period and are ready for the exciting times that 2015 might throw at us!

But saying that I can’t do a 2015 post without what I expect about 2015. Like a lot of people we are all a bit taken back by the news that the traditional mailer and flip have been cancelled. I sit right on the fence about that, it’s been increasingly obvious that they’ve been struggling for content for these for a long time, so on that side I can see why they’ve been stopped, but obviously this is something that the group has always done since the start so I can appreciate the other side of the argument too.

As for 2015, for the first time in all my years running this site I’m at an impasse. The girls are heavily involved in their own projects right now. As we know Rochelle has seemingly moved all her solo ventures like TV presenting and her Very range to management away from the groups management. The other 4 are seemingly keeping their own interests alongside Fascination for now. Mollie has another Oasis range due out – I presume for Spring/Summer. Una obviously is on The Voice of Ireland, and expecting baby number two. Frankie has the strictly tour coming up, and has recently spoken to the press about how herself and Wayne would like another little buba at some point. Vanessa seems to be loving the holiday life!

Musically – who really knows. We know they keep making the right noises about new music coming soon, and recording and everything but as we know Christmas as come and gone, and we’ve not had any release. Like you all I wouldn’t mind some new music, but I honestly feel we might have a bit of a wait for it.

It’s our SEVENTH birthday in April too! Honestly can’t believe I’ve been doing this for so long!