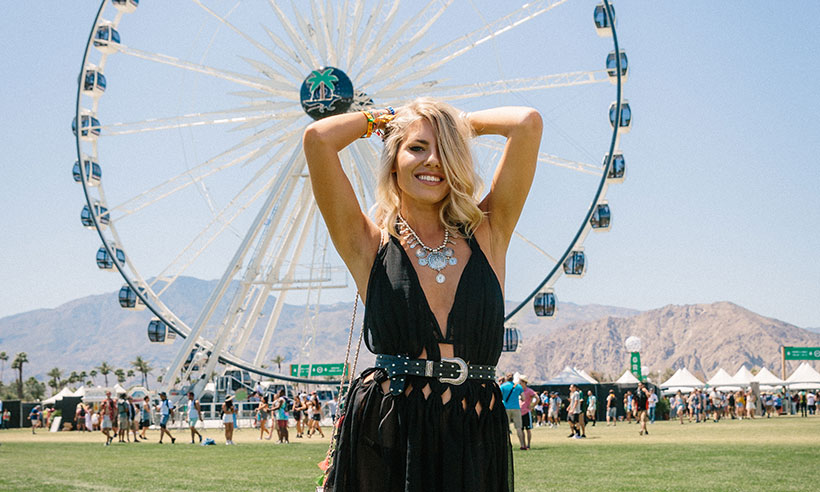 Mollie King, former Saturday’s star turned fashion blogger, caught up with Hello! Fashion Monthly at this year’s Coachella Festival. Known for her flawless blonde locks and effortless style, it’s no wonder she fits in with the LA cool crowd. This year she worked with ghd to debut many of the festival hair trends we can expect to see over the course of the summer. Find out how the blonde beauty achieves her own hairstyles, what inspires her boho-esque festival fashion choices and why her motto is “go hard or go home!”

What do you love most about Coachella festival & who do you want to see perform?

I love how Coachella has got such a chilled out and fun vibe, plus the setting is incredible and the sun is always shining. The music acts are always amazing too and the fact that when you walk into the festival and see the iconic Coachella wheel, you know that you’ve arrived. I was most excited to see Lady Gaga! And then DJ Snake and Martin Garrix as well. The line-up was great this year!

I am definitely a blonde! I once tried on one of the girls in the band’s dark extensions in the front of my hair and it looked terrible so I wouldn’t try it again – unless I tried low lights so that it was dark underneath but still light on top. I definitely wouldn’t go dark all over.

Read the full interview over at Hello Fashion Magazine

Seems drama unfolded yesterday afternoon as an Interview with Hello Magazine Mollie let slip that the girls where very happy “to meet him” which in term prompted Frankie to head to social networking to confirm the news!

The girls seem to be on holiday again, apparently Mollie has already left the country and has been (unconfirmed I think so far) to be back in the USA, and Rochelle tweeted last night about a holiday, so not bad work this popstar life is it?

Just a brief news roundup, a magazine one!

@UnaTheSats wedding photos, and details, are finally set to be revealed in Ok Magazine! The magazine is out tomorrow (Tuesday 10th July) so make sure you pick up your copy to get the photos and the details of the first Saturdays wedding!

Also in Hello Magazine this week, Vanessa & Rochelle’s trip to Tanzania for Comic Relief is being detailed, as a pre-cursor you can catch a video of their trip via the Hello website