This afternoon The Saturdays went into their ‘long dresses’ wardrobe and performed Disco Love on the first episode of the new series of The Paul O’Grady Show. As always you can catch this performance below.

The girls where also added today to Free Radio Birmingham’s Free Radio Live 2013, sadly the event is basically sold out (unless you want to stand), this is in addition to their shows in Scotland and Leeds this festive season.

Firstly we start with the news that our very own Mollie is doing a charity auction with Battersea Dogs & Cats Home in London. Highest bidders will win a full half hour with their favourite dog loving celebrity, and the walks will take place in the relaxing surroundings of Battersea Park, close to the iconic south London rescue that has cared for 3.1 million dogs and cats.

All money raised is being used by Battersea Dogs & Cats Home who help thousand’s of homeless dogs and cats ever year.

You can bid on the event via the official site, as of time of posting Mollie’s 30min walk is currently standing at £510, so it’s probably out of most of our visitors reach, but I would expect Mollie’s walk to raise close to, or over £1000 🙂

The girls are performing on TV! Yes (I know!) the girls are seemingly set to perform Disco Love on the new series of The Paul O’Grady show, they are on next Monday (11th November) from 5pm. All videos will be on the site after it airs 🙂

Yesterday the girls launched their new Nokia deal. As we reported a while back, you can be in with a chance of seeing The Saturdays in a concert in February next year. There are only 20 winners, and to be in with a chance you must buy a mobile phone from the Carphone Warehouse range, including the Nokia Lumia 520. I know this has caused quite a mixed reaction within the fanbase. I’ve added a few pictures below.

Site News: I know our gallery is a mess, I have an idea to resolve it but its very time consuming, and I honestly don’t have the time to source pictures anymore along with everything else. If anyone out there wants to help and lend a hand then please contact me via e-mail on thesatscouk@gmail.com 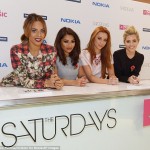