Hello everyone! I do apologise for the lack of updates in recent weeks, been very busy and those on social media will have seen that we have been active on there generating votes for Mollie on Strictly – we have got her to Blackpool after being in the dance off for the previous few weeks. We need everyone to pull together again this weekend and keep Mollie and AJ going!

Then once you have voted for Mollie, we will all need to get involved with Vanessa who has arrived in Australia for her stint on I’m A Celeb – but remember the first week is people voting for whom they want to take part in the trials, then you vote for whom you want to win.

Here’s a catchup of Mollie & AJ on Strictly:

Week 5 – Viennese Waltz ‘Anyone who had a Heart’

Strictly is back! This time it’s Mollie’s time, and she kicked off the show with a Jive! The public vote opens next weekend, so make sure you are ready to vote!

The next single from Mollie King is here sooner than we think! Are we ready to let our Hair Down? September 1st …

Spotify Users can pre-load the new single ready for 1st September via this link.

Fresh from the announcement that she is to star in this year’s ‘Strictly Come Dancing’, Mollie King storms back on to the UK music scene with her new single ‘Hair Down’.

Mollie has reunited with pop maestro Brian Higgins – Xenomania to produce an in your face pop banger that fans have longed to hear from Mollie since her announcement she was releasing solo music.

‘Gotta let my hair down, I just wanna dance now’ proclaims Mollie on a immense track that gets firmly stuck in your head from it’s very first listen.

The song will be released on Friday 1st September via Island Records, accompanied by a breathtaking video, shot in South Africa by Kyle Lewis

Mollie says: “I’ve spent the last few months working hard in the studio developing my sound and experimenting with my solo music. I’m a huge fan of pop music myself and was thrilled about working with Brian Higgins again on this record. Brian wrote and produced ‘All Fired Up’ which was one of my favourite Saturdays songs; he totally gets pop and I think we’ve collaboratively come up with some amazing records that the fans are going to love hopefully as much as I do!”

Mollie has spent the last two years writing and recording her debut solo material with some of the globes hottest producers.  Next month sees her hit the dance floor as one of the stars competing in ‘Strictly Come Dancing’ 2017. Mollie  is best known as one-fifth of leading girl group, The Saturdays. Since forming in 2007, the multi-platinum selling band have sold over 5 million records and concert tickets worldwide, scored 13 Top 10 singles and 5 Top 10 albums. The band also embarked on four nationwide headline tours and starred in three primetime TV series, including ‘Chasing The Saturdays’ for E! which aired in over 40 territories.

Beyond the group, Mollie has established herself as a mainstay of the fashion press, alongside being a permanent fixture on London’s style scene.

Following in Frankie (and Rochelle’s) footsteps, Mollie has been announced as the first celebrity to be taking part in this years Strictly Come Dancing!

Go Mollie! We will be supporting her though-out the show, so keep checking back for more updates from Strictly, videos, how to support and vote for Mollie and more! 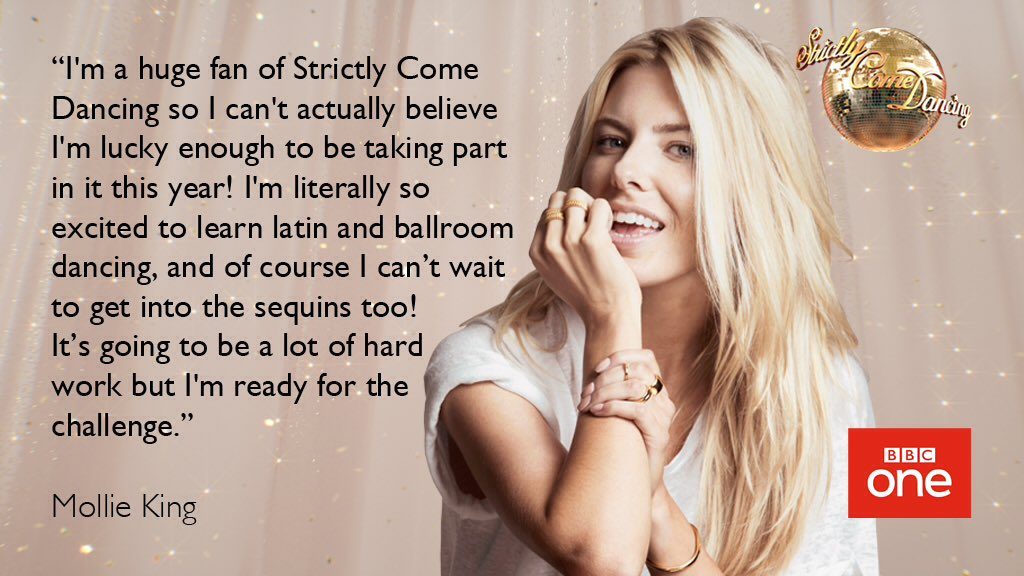 The Saturdays’ Frankie Bridge is the first celebrity confirmed for the 2016 Strictly Come Dancing UK Tour.

Bridge, a finalist in the 2014 series, was due to appear on this year’s tour but pulled out when she discovered she was pregnant with her second child.

Bridge, 26, said: “I was so disappointed not to be able to perform in this year’s Strictly Tour, as I’d been so looking forward to continuing my Strictly journey. But following the birth of my son in August, I’m thrilled to have been asked to join the 2016 tour.
“It will be great to get my dancing shoes back on and be part of the Strictly family again. Roll on January!”

Bridge was joint runner-up with Simon Webbe to winner Caroline Flack in the 12th series of the competition.
She was partnered with Kevin Clifton, who is currently whirling EastEnders actress Kellie Bright around the dancefloor, but it has not been announced if he will be joining her on the road.
Bridge will join competitors and professional dancers from the present series of Strictly as they attempt to dazzle judges Len Goodman, Bruno Tonioli and Craig Revel Horwood, who also directs the tour.

The Great British Bake Off presenter Mel Giedroyc has already been announced as the tour’s new host.
The tour kicks off in Birmingham on January 22 and will play 30 dates across Sheffield Arena, First Direct Arena Leeds, Manchester Arena, Liverpool’s Echo Arena, Metro Radio Arena in Newcastle, The SSE Hydro in Glasgow, Nottingham’s Capital FM Arena and The SSE Arena in Wembley before a finale at London’s O2 Arena on Valentine’s Day. 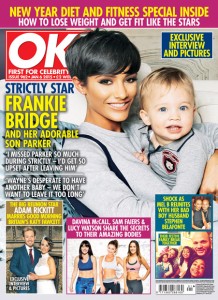 Frankie has been talking to OK Magazine about life after Strictly and has revealed that herself and Wayne are looking to increase the size of their family!

Speaking exclusively to OK! magazine, she said: “Strictly was amazing but being reunited with Parker was better, in a completely different way.

“It was something I needed to do and now I’ve done it, I’m back to Mummy duty and that’s the best job!

“What got me through Strictly was being back with Wayne and Parker. I finally have some normality back.”

Frankie, 25, gave birth to son Parker in October 2013 – and she is already looking forward to expanding her brood with husband and former footballer Wayne, 34.

“Now Strictly is over, I’d love to have more children but we’re still enjoying Parker,” the ex-S Club 8 star explained.

“I see other little babies and they’re so little and cute so I would like to at some point and we don’t want to leave it too long, I wouldn’t want any more than three years between them.

“I’d love to have a girl but we’re convinced we’re going to have boys now I’ve had Parker, but I don’t care. I’m quite a tomboy so the only reason I’d want a girl is so I could buy girl stuff – their clothes are so much fun.”

Read Frankie’s full interview and see the adorable photo shoot with her son Parker in this week’s issue.

After weeks and weeks of the highest level of dancing our very own Frankie appeared in the final of BBC’s Strictly Come Dancing.

After a fierce and tightly fought final Frankie and her partner Kevin lost out to the hot favourite Caroline Flack.

Everyone here at The Saturdays Fansite is amazed at how well Frankie has done, she’s been a shining star for herself and The Saturdays and we are very proud of her achievement.

This isn’t a live blog like the tour but will be updated all evening.

YOU CAN VOTE NOW!!

Online (Free!) Go to the BBC Strictly website and you can vote THREE times for FREE  – http://www.bbc.co.uk/strictly/

The media are predicting a win for Caroline, but Frankie will push her all the way. The key for us and Frankie is YOU – and the rest of The Saturdays fans – we can group together and swing this our way! So when voting opens, vote vote vote!