Firstly a huge good luck to all our visitors sitting exams over the next few weeks. Exam season is well and truly upon us now, from SATS to GCSEs, A-Levels and at Uni too! If you are sitting an exam then we wish you all the very best, we know you can get the results you want! 🙂

On The Saturdays front its all still a little quiet, 30 Days celebrated its 2 year anniversary, two years .. quite amazing to think that the album it was eventually released from only came out 6 or so months ago!

Rochelle was pictured leaving the Paradise Bar with hubby Marvin over the weekend, added a few pictures below.

Mollie was on ‘Tom Daley goes Global’ on ITV on Thursday evening. As I was out all weekend I’ve been unable to edit the show, but I will do so this evening and will pop it up on the site just in case you’ve not seen it yet later this evening.

Una has also confirmed that RTE have commissioned a second series of Una’s Dream Ticket. If you are aged between 8 and 16 and want to live your dream, you can apply to be on the show now! You have until 25th July to enter!

As I posted previously Mollie and Vanessa should be returning from their holiday’s soon (as this weeks, very odd flip said too) so hopefully we will have movement on the first single from the Greatest Hits soon!

Until tomorrow, or later when I post the video, have a great day 🙂 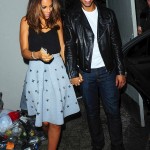 Hey all! Sorry for the lack of news updates recently, been a little busy and enjoying the lovely weather the UK has had to offer – hope you have all been enjoying it too, and if you are currently taking exams we wish you all the very best!

First on the agenda is Mollie’s Birthday Project. For those who have noticed we joined up with the book organisers this weekend gone to see the book being made, those who follow us on twitter would have seen a sneak peak of the book. We had hoped the book was going to be mentioned in last weekends mailer but sadly it wasn’t 🙁 – but there is still time to add your page, they’ve had soo many entries that they’ve had to buy another book! Details are over on the right.

As you are well aware no doubt Rochelle and Una had her hen-do’s this weekend, there are pictures and talk all over the Internet, so rather than report on them all, we can use the girls new favourite news source of the Daily Mail who gives you a round up. If all goes to plan I’ll get some new pictures added to our gallery this evening 🙂 The Mirror reports that Jay from The Wanted had to pay to get into the club!

Una likes a bit of a party 😉 – so she also was out partying no Friday night, again the girls favourite news source the Daily Mail covers the story, once again I will attempt to get the gallery updated this evening with some pictures 🙂

Frankie is apparently ready to get married – we ask does Wayne know?

I shall update the gallery this evening with the hen pictures 🙂

Fancy winning a signed iPod from all of The Saturdays? Well of course you do! Well here is your chance, muzu.tv have a competition running where you can win one! Simply pop over to their website and enter the competition, but make sure you don’t win instead of us 😉

Congratulations to The Saturdays as 30 Days becomes their 11th UK Top 10 Single! The single eventually charted at number 7.

Remember you can still purchase the single, so don’t stop buying if you haven’t done so yet!

Last Sunday (13th May) the girls appeared on the Channel 4 show Sunday Brunch. Here are a couple of videos from the show last weekend:

The much hyped(?) performance of 30 Days from Keith Lemon’s prime time ITV1 show Lemonaid finally aired tonight, you can catch this video below:

What did you think of this performance? Leave us a comment 🙂

Our girls hit Daybreak this morning to further promote 30 Days, the videos are available to watch below 🙂

The girls also had a chat on Lorraine, if you scroll down its the 3rd video below 🙂

As always, please use our embed links. If you are desperate for a youtube link to share (please note you can share vimeo links on the likes of facebook/twitter, they are just the same as YouTube just a lot less restrictive) then I have added the videos to Youtube here.

In days gone by we basically had chart updates almost daily, but it seems The Official Charts Company haven’t taken too kindly to this and now getting information is harder. We found out yesterday via twitter that as of sales from Sunday-Monday 30 Days was at number two. This afternoon BBC Radio 1 updated everyone on the current chart positions, I assume from sales from Sunday – Tuesday and they have placed 30 Days at number two!!

We can push the single more everyone, make sure you spread the word, and get everyone downloading it, links are on the right side of this site! Go go go!

30 Days is ONLY number 8 on iTunes, we need to raise it higher. Get buying the EP here then buy those remixes too! Buy them one at a time so you will get 4 sales for the group, plus the EP = 5 sales 😀 go go go!