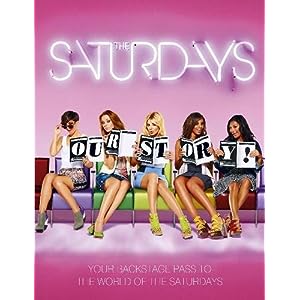 The girls have just revealed their next step to world domination…

That’s right, on October 14th you’ll be able to get your hands on ‘Our Story’, the brand new book from The Saturdays!

Through their own individual stories, Frankie, Vanessa, Una, Mollie and Rochelle will tell the tale of the band’s incredible journey to success. With personal insights into their lives before finding fame, their love interests, and their strong friendships, you’ll get an exclusive glimpse into the exciting world of The Saturdays. Packed with fashion and beauty tips, all the backstage gossip, and accompanied by photos from the girls’ own collection, this is a must-have for all you Sats fans!

To celebrate the release, the girls will be signing copies of the book on Saturday 16th October at 2pm at WHSmith Bluewater, Greenhithe, Kent DA9 9SH.

Please arrive early to avoid disappointment. Access to the queue is on a first come first served basis. The band will be signing copies of The Saturdays: Our Story only. Due to time restrictions there may not be the opportunity for posed photos. We thank you for your understanding in these matters. For further information contact WHSmith on 01322 386843.

‘Our Story’ is available to pre-order NOW. Just click HERE

The Saturdays must have heard about the star-studded crowd Guy Ritchie’s Mayfair pub drew in on Tuesday because the following night they showed up to see what all the fuss was about.

The previous night JLS, Jade Ewan, Professor Green, Candy McCullock and Ingrid Tarrant had all popped into the boozer coincidentally, so the girlband were quick to follow.

Mollie King, 23, took her boyfriend Andy Brown along on the girls’ night out but the other ladies decided to go solo.

A very tanned and blonde Frankie, 21, dressed down in blue jeans and a nude-coloured zip up top, along with Una, 28, who opted for acid wash skinny jeans.

Molly stepped out in green tight cargo trousers alongside Rochelle, 21, who wore a little black dress and tights.

But their fifth band mate Vanessa White, 20, was no where to be seen and perhaps wanted a night out of the spotlight.

After their night out, Mollie updated her Twitter profile and posted: ‘Had dinner with The Saturdays and about a million boys – Tinne Tempah, Jordan Jay Blue, Simon Webb & the legend Ne-Yo Compound! Can’t believe it.’

The girls had performed at G-A-Y in London over the weekend and are currently preparing for their Headlines tour which will kick off in early 2011.

The images of this article are added to the gallery. Please click on the pictures of Una to see the rest!

It could be The Saturdays’ lucky day. Top US hitmaker Ne-Yo wants to help them take America by storm.

The man behind Beyonce, Rihanna and Jennifer Hudson’s chart-toppers tracked them down for an intimate business dinner in the Punchbowl pub in London last night, along with Tinie Tempah and Simon Webbe.

We’re told: “Ne-Yo reckons The Sats are the next Spice Girls. They’re going to talk again in a few weeks.”

Next time, ladies, make sure he takes you out – we ran into him at Mo*vida with a bath-tubsized ice cooler full of bubbly. That’s our kind of party.

I didn’t scan this myself. Scott from MollieKingFan scanned this.

I know there are a few members who don’t credit when it comes to our gallery, but please try to do it this time when you’re taking pictures from our gallery. Scott worked hard to scan these images in for you to enjoy! so please respect that 🙂

Thank you so much Scott!