The staff and visitors of The Saturdays Fansite would like to extend our congratulations to Rochelle and Marvin on the birth of their second child.

Hey all! Hope you are all doing great and well, and that you have summer! (If you are in the Northern part of the world anyway!) Just don’t ask us in the UK about summer …

It’s all gone a little quiet again, as the girls, rest(?), and get ready for the big Gentleman promo push, hopefully the TV information will start filtering in shortly and we will update you on that accordingly.

As you are probably aware, Rochelle has returned to the group now, so hopefully she will do some TV promo/performances with the rest of the girls as they release Gentleman in under two weeks now! To kick off promo Mollie is on BBC Radio 1 this weekend, doing another Surgery session, almost excatly a year later than her last, she must book these things in advance, so make sure you tune in to that!

Rochelle and Marvin (and THAT buggy) have also been out and about, not sure why the paps decide to take photographs of a family walking around is beyond me, but I’ve added a couple of the pictures below, the couple also enjoyed a night out! I know its hardly breaking/exciting news, but everything will kick up a few gears soon … 🙂 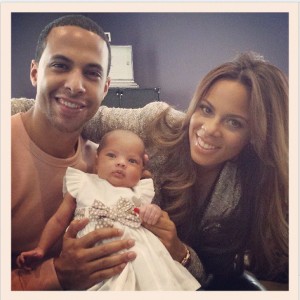 Everyone here at The Saturdays Fansite sends our congratulations to the new couple, and the newest member of The Saturdays family!

The new dad and former JLS singer said the couple are “overjoyed” and  revealed “mum is doing great” in a post on Twitter.

He wrote: “This morning we welcomed our baby girl Alaia-Mai Humes.

“Mum is doing great & baby is amazing! We are both overjoyed! Thanks for  your love x

Here’s a lovely early christmas presents from Rochelle and Marvin!

Our newly expecting couple posted these to her Instagram account a few days ago! I’m sure it will be an lovely time in the Humes household this Christmas as the couple prepare for their first child together. All together now awwwwwwwwwwwwwwwww

Today saw the day of round two of The Saturdays weddings as the lovely Rochelle and Marvin (From JLS, if you don’t know!) have got married in a lavish ceremony in London. Little news of the wedding is around so far, the couple have an exclusive with Hello magazine (?) so details will appear as the paps try their best to get shots etc. Either way we wish the couple all the best today!

To top of the rumours, the Evening Standard are claiming that The Saturdays are due to be involved in the Opening Ceremony at the Olympics tonight …..

There has been speculation that Arctic Monkeys and The Saturdays will be among those joining Sir Paul McCartney on the bill after members of both groups apparently tweeted images of themselves at rehearsals.
Source: Evening Standard