Need to get this as a New Year’s promise or something to put a post up weekly for these flips! THIS week’s however – which is viewable on http://www.thesaturdays.co.uk/ – is a bit special as it includes Matt at some point! Those eagle eyed and aware of what he looks like might spot him, otherwise if you have been to the Wembley show you might spot yourselves as well!

Update: seems they are finally uploading the flips to YouTube themselves again … Catch the flip below! 🙂
httpvh://www.youtube.com/watch?v=RauCvdz8gfs

@thesaturdays roll into Dublin this evening to perform on the final *sob sob* night of the All Fired Up Tour. It didn’t seem two seconds ago that the tour was announced, and now we are here at the final final night.

If you are going to the last show tonight, have an awesome time, and show the girls how much we do really appricate them!

The tour was filmed in Manchester on 9th December, so hopefully that will see a future DVD release for the girls, if this is along side a new album release, or a re-release of ‘On Your Radar’ only time will show.

@thesaturdays hit the Echo Arena in Liverpool on Saturday (3rd December) and I was in attendance. I recorded a few videos from the show as people had asked, I’ve put them under the cut below (click on read more) that way if you don’t want to see them you don’t have to!

Remember if you go to ANY show send us in your review, we have a couple already and we will be doing our own as well, all will go in the Tour section. Normal site service will resume later this week – we are at the Brighton show tomorrow … then we aren’t going to another show until Wembley … so if you have e-mailed us etc. Expect a reply soon. We’ll continue our tweeting from the concert in Brighton tomorrow so if you want to hear stuff follow us at @TheSatsCoUk and/or like our Facebook Page for any gossip on the show.

END_OF_DOCUMENT_TOKEN_TO_BE_REPLACED

@thesaturdays hit the seaside town of Bournemouth in just three days now, as the All Fired Up tour kicks off at the Windsor Hall at the Bournemouth International Centre this coming Friday, and we shall be there to take in the sights of the opening night!

According to twitter this morning the girls finally see the actual stage today – leaving it a little late girls?! – and we imagine the next few days will be non-stop running through the show and getting those last minute tweaks ready for the show.

What songs are you wanting to see at the show? We already know they are performing ALL the singles – thats a good 12 songs already! Plus no doubt a selection of songs from the new album On Your Radar .. its going to be an exciting night that is for certain!!

@thesaturdays All Fired Up Tour kicks off in just seven days .. yes it is really only a week away when the girls hit the seaside town of Bournemouth to start up their new Arena Tour! Excited? We sure are that is for sure!!!

If you live in the south coast, and want to go, then don’t hang around, Tickets are still available, from Ticketmaster! You can even pick up tickets for as little as £21 via SeeTickets and you can pick up some tickets via the venue too

We hope to see some of you down there!

During the girls’ takeover of Capitalfm.com, they revealed that the ‘All Fired Up’ tour is going to be their biggest and best yet.

“It’s an arena tour so there are endless possibilities on the big stage,” said Una.

“We will be having loads of dancers, loads of visuals and we’ll be getting involved in all the creative meetings and making sure we’re styled up as a unit.

“We’ll be introducing out new album on the tour so it’ll be really fresh, but there’ll also be all the old classics so there will be something for all The Saturdays‘ fans.”

As for the new album, Mollie revealed that it’s a particularly special one for the girls. “It’s really personal because we’ve written half of it ourselves,” she said.

“It’s got more dance tracks like ‘Notorious’ and ‘All Fired Up’ but the whole album isn’t like that – we’ve got some classic The Saturday’s tracks on there and we’ve got ballads so there’s a little bit for everybody on it.”

All Fired Up is out now on iTunes, Amazon MP3, 7Digital plus the CD is in store too – so get buying – they are still pushing Pixie Lott for the number one, remember to buy downloads individually, then each download counts as one sale

If you missed @TheSaturdays pre-sale for the ‘All Fired Up’ arena tour, the tickets are on general sale NOW. You can order from Ticketmaster, SeeTickets and other leading ticket websites. 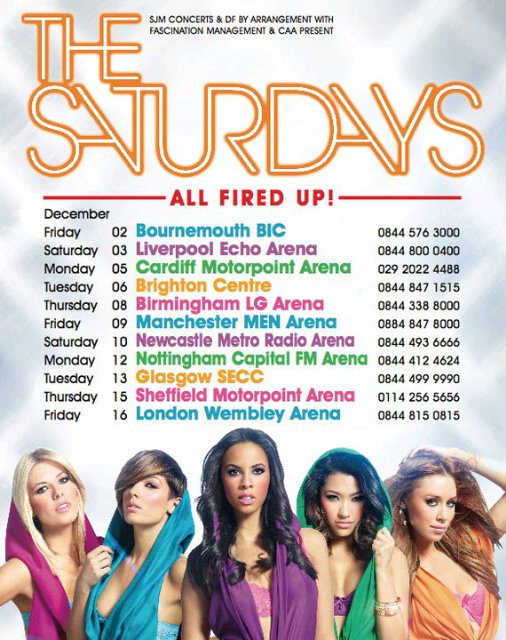 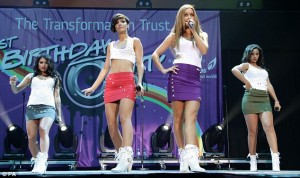 Like many girl groups, bandmembers give themselves a sense of unity wearing co-ordinated costumes.

But as her Saturdays bandmates opted for matching white ribbed vests on stage at the O2 Arena in London last night, Frankie Sandford decided to upstage them with a skimpy crop top.

Clearly proud of her washboard stomach, the 21-year-old flaunted her slim figure in a loose-fitting white top, which barely covered her purple bra.

Crop trop aside, Sandford complemented her bandmates, who wore a series of colourful studded mini skirts and matching white boots.

However, their bandmate Mollie King missed out on the festivities because she is still recovering from a horsefly bite.

She is currently on crutches after contracting the skin infection cellulitis so have missed out on all the group’s festival gigs over the past two weeks.

Before the performance, Una tweeted fans: ‘Heading to the O2 to perform at The Transformation Trust charity gig, should be a good one!!:)

47 images of this event are added to the gallery, please click on the picture in the article to check them out!