The girls appeared at the Pride of Britain Awards yesterday, I’m adding pictures to the gallery, there are 18 HQ’s and MQ’s in the folder at the moment, but it’s not complete yet. so keep checking this post if you want to see the rest! 🙂

I’ve also added 86 MQ images of the girls arriving and leaving this event.

Edit: a few more images are added in the first folder. A few errored, trying to upload them tomorrow!

We kinda forgot to mention, that the Extended version of Headlines came out two days ago!

If you want to support the girls by trying to get them to number 1, you can buy the album by clicking on the links I’ve put in the bottom of this post. As you can see, Matt recorded and posted the videos of the ladies appearing at Loose Women. Now I also found an article about this. In some way I got double feelings about this article, but decided to post it anyway! 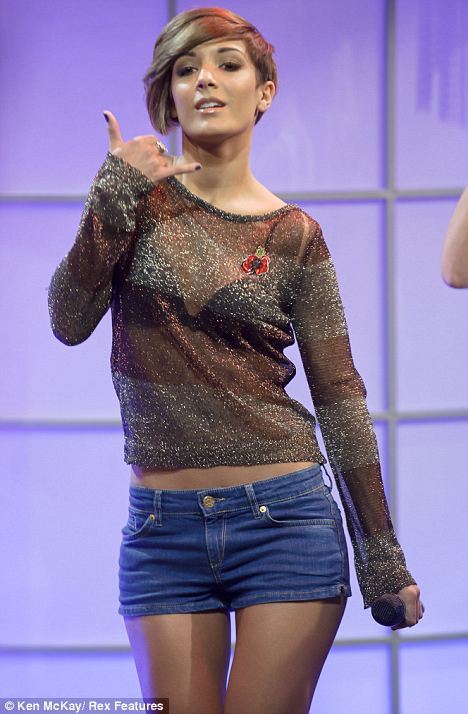 As a member of girl group The Saturdays, Frankie Sandford is used to sharing the spotlight with her four bandmates.
But as she performed on TV show Loose Women today, it looked like the 21-year-old was hoping to stand out in her scantily-clad ensemble.

Although the group often co-ordinate their outfits, it appeared Frankie hadn’t consulted her bandmates when she decided to wear a pair of denim hotpants, see-through top and platform heels.

While three of her bandmates were going for a more sophisticated girlie look in skirts and dresses, Irish singer Una Healy covered up in a rockier combination of ripped jeans and a white vest.
Rochelle Wiseman was looking chic in a beige pencil skirt and black top, while Vanessa White and Mollie King opted for white and orange dresses respectively.

After their last single Missing You reached No.3 in August – despite their heavy promotion – they are hoping they will finally get their first No.1 with their new track, which features American rapper Flo Rida.

So perhaps Sandford is hoping her sexy image will help the group secure their first number one.

Since The Saturdays first hit the charts two years ago, Sandford has been quickly established at the group’s sexiest member.

She came in fourth place in FHM magazine’s list of the 100 Sexiest Women in the World this year, with Healy in 11 and Wiseman at 98.
Unfortunately for Mollie and Vanessa, they missed out on the top 100 altogether.
After their performance on Loose Women, it appeared The Saturdays all decided to have a wardrobe change and were wearing T-shirts and jeans when they left the ITV studios.

I’ve added the images of this article to the gallery.

2 of the images are in the candids-section right here

And you can find the other 3 right here

The B-side of the single Higher appeared on youtube! It’s called Had It With Today.

Hi everyone!
There is a little something I want to mention.

As a lot of you know, we have a YouTube account with videos from every TV show and performance. How do we get those videos? Our admin Matt records everything from the TV. Not sure how he does it, but he puts a lot of effort and time in this.
And what we see on a few Saturdays fansites, is that people use our videos and don’t give any credit or a little thank you.
I admit, sometimes I forget to credit somebody else, if I don’t know where the original picture came from. But we are 3 very friendly people, and always apologize and change it back when we get a comment about this. And try to do our best to find the source of every picture, video and article.

Now my question is, the next time anyone of you uses a video that’s been captured by Matt or uploaded by Marit. Please just make a little note under it and mention our name.
That shows a lot of respect to the owners!

We really hope to see this in the future 🙂
If so, Thank you!!

Scott from Mollie King Fan and one of our followers on twitter, Ellie (@xeeellie) listed some upcoming TV Appearances!

I know it still looks a bit messy, cause I don’t got everything in detail yet. If you see any mistakes, feel free to leave a comment below!

I’m pretty sure Matt is going to record these tv-shows with his, erm, recordingmachine? (Girls and technology) So don’t worry! You won’t miss out on anything!

GORGEOUS girlband The Saturdays yesterday urged Brits to pin on a poppy and help the Royal British Legion break all records for fundraising this year.

Launching the annual appeal, now in its 90th year, the Legion wants as many people as possible to support troops to raise more than £36million.

The star-studded launch marks the start of a period of intense campaigning in the run-up to Armistice Day on November 11 and Remembrance Sunday three days later.

After the girls performed a special concert at Colchester Garrison, in Essex, band member Rochelle Wiseman, 21, said: “It’s humbling to be asked to help launch this year’s Poppy Appeal.

“We will do anything we can to support the appeal and our brave armed forces and their families.”

Fellow singer Frankie Sandford, 21, said: “I really admire and respect our Armed Forces and their families. What they do is totally amazing.”

The Saturdays performed for the families and personnel of 16 Air Assault Brigade, which is currently on operations in Afghanistan,

The Poppy Appeal raises money for the injured and their relatives, as well as those who lost loved ones.

Russell Thompson, the Legion’s director of national events and fundraising, said: “Despite the current economic times, we trust the great British public will show their support for those who have sacrificed on behalf of their country.”

Police officer David Rathband, who was blinded by gunman Raoul Moat, helped launch the appeal in Newcastle upon Tyne.

Speaking at the Renwick War Memorial, Pc Rathband, 36, said: “The appeal makes a huge difference to many people far less fortunate than me.”

The girls appeared at the The Royal British Legion’s 2010 Poppy Appeal (Quite a mouth full!) yesterday.

I added 25 pictures of the performance. And 17 more images are coming later today. (Or tomorrow, that depends on how my laptop behaves)